When you choose Allah over everything else, He will most certainly take care of you. So when you are given two choices, remember Allah and choose wisely. Choose truth over falsehood, piety over desire, mercy over harshness, justice over oppression, and choose Him over yourself… then sit back and watch how beautifully Allah chooses for you and runs the affairs of your life ever so beautifully. 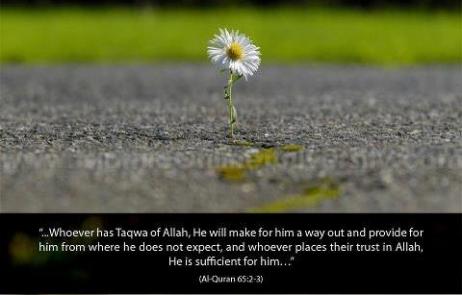 whole family — the father, mother, daughter, son and his wife.
“The father named himself Mohammed, the mother Mariam, the daughter Aisha, the son Essa, and his wife Sara.

Essa said he and all family members converted to Islam mainly because they personally feel that God can’t be two or three, Almighty Allah, the Creator can only be One.

Feeling ecstatic that he had been guided to the right path, former protestant Christian James, now Essa, said his whole family embraced Islam after a two-year deep study of the religion, during which they read the translation of the Holy Quran in English and many other books. “I am also a fan of late Ahmed Deedat, Dr Zakir Naik, Yusuf Estes, and many other renowned debaters specialised in comparison of religions.”

Adding, Essa said he faced no difficulty embracing Islam. “Though our relatives back home gave no comments, I am planning to talk to them about the mercy of Islam and how it is the right path to real happiness in life and hereafter.” Alhamdulillah

I am American revert into Islam. I used to be Catholic.

Reason why I choose Islam is because, I always felt it was true, right, and felt safe with the Quran. When I used to looked at the Bible when I was a kid, and today’s Bible, it’s not all the same.

It’s was very confusing for me, and I didn’t know what to believe. So I went to some book store, to look at books, I picked up the Quran. It blew me away, I saw a bright light that I never seen before, and I had all the chills, but it was a good feeling.

So, I studied in Islam, then did Shahada.

First of all I’d like to thank Allah for blessing me, and inspiring me to become a better person. I am thankful for all the people I have met on my journey, and all the priceless things I have learned.

There is only One God, He alone is the Creator and Sustainer of the Universe! Thanks to God, Glory be to Him and all praise is His, I am stronger in Faith, in peace and contentment, illuminated, consciously aware, inspired, and wiser. I hope for world unity in a society spiraling out control.

I believe that the character of a person goes so much deeper than sight. Truth seeker, researcher, optimistic, loyal, responsible, and open-minded. Determined (giving up is not applicable to me, there’s no such thing as impossibility). Looking forward to meeting people who share my interests.

I love to seek/share knowledge, and learning this beautiful deen (way of life). Islam – a religion of Peace, LOVE, Justice and Tolerance… I know some people in my family didn’t accept me cause I am a revert into Islam, but I don’t pay no mind. I always tell them never judge anyone, only let Allah judge them. Cause no one can judge anyone, but only Allah can. You know I never been as happy in my life, since I ever revert into Islam. “Without Islam I don’t know where I would be today.

My motivation for succeeding academically and succeeding professionally – all that stems from Islam, and I don’t think it’d be there if it weren’t for Islam.” Eventually I hit a moment of truth: my new-found self-fulfilling activism was nothing more than merely embracing a faith called Islam where I could live in peace as a “functional” Muslim.

I bought a beautiful long gown and head cover resembling the Muslim woman’s dress code and I walked down the same streets in “Jersey Shore” in Atlantic City, New Jersey, and neighborhoods where only days earlier I had walked in my shorts, very short dresses, or “elegant” western business attire. Although the people, the faces, and the shops were all the same, one thing was remarkably distinct–I was not–nor was the peace at being a woman I experienced for the very first time.

I felt as if the chains had been broken and I was finally free. I was delighted with the new looks of wonder on people’s faces in place of the looks of a hunter watching his prey I had once sought. Suddenly a weight had been lifted off my shoulders. I no longer spent all my time consumed with shopping, makeup, getting my hair done, and working out. Finally, I was free. Of all places, I found my Islam at the heart of what some call “the most scandalous place on earth,” which makes it all the more dear and special.

Today I am still a feminist, but a Muslim feminist, who calls on Muslim women to assume their responsibilities in providing all the support they can for their husbands to be good Muslims. To raise their children as upright Muslims so they may be beacons of light for all humanity once again. To enjoin good–any good–and to forbid evil–any evil.

To speak righteousness and to speak up against all ills. To fight for our right to wear Hijab and to please our Creator whichever way we chose. But just as importantly to carry our experience with Hijab to fellow women who may never have had the chance to understand what wearing Hijab means to us and why do we, so dearly, embrace it.

I couldn’t be happier to shed all my very short dresses in trash and the “glamorous” Western lifestyle to live in peace with my Creator and enjoy living among fellow humans as a worthy person.

It is why I choose to wear Hijab, and why I will die defending my inalienable right to wear it. Today, Hijab is the new symbol of woman’s liberation.

To women who surrender to the ugly stereotype against the Islamic modesty of Hijab, I say: You don’t know what you are missing…