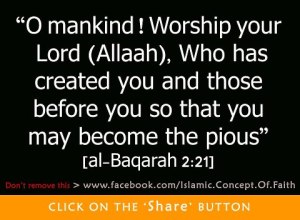 The Islamic belief about Jesus demystifies for us who the real Jesus was. Jesus in Islam was an extraordinary individual, chosen by God as a Prophet and sent to the Jewish people. He never preached that he himself was God or… the actual son of God. He was miraculously born without a father, and he performed many amazing miracles such as healing the blind and the lepers and raising the dead – all by God’s permission. Muslims believe that Jesus will return before the day of Judgement to bring justice and peace to the world. This Islamic belief about Jesus is similar to the belief of some of the early Christians. In the Quran, God addresses the Christians about Jesus in the following way:

O People of the Book, do not commit excesses in your religion, and do not say anything about God except the truth: the Messiah, Jesus, son of Mary, was nothing more than a messenger of God, His word, directed to Mary and a spirit from Him. So believe in God and His Messengers and do not speak of a ‘Trinity’– stop [this], that is better for you– God is only one God, He is far above having a son, everything in the heavens and earth belongs to Him and He is the best one to trust. [The Noble Quran, 4:171]

Since it has clearly been shown that Jesus is not God both according to the Bible and for historical and rational reasons – what is the next step for you?

We invite you to look further and investigate Islam. Islam is not just another religion. It is the same message preached by Moses, Jesus and Abraham. Islam literally means ‘submission to God’ and it teaches us to have a direct relationship with God. It reminds us that since God created us, no one should be worshipped except God alone. It also teaches that God is nothing like a human being or like anything that we can imagine. The concept of God is summarised in the Quran as:

Becoming a Muslim is not changing or losing your Christian identity. But it’s going back to the original teachings of Jesus. Guidance ultimately comes from God. We ask God to guide us and you. May God’s peace and blessing be upon you for the rest of your days.