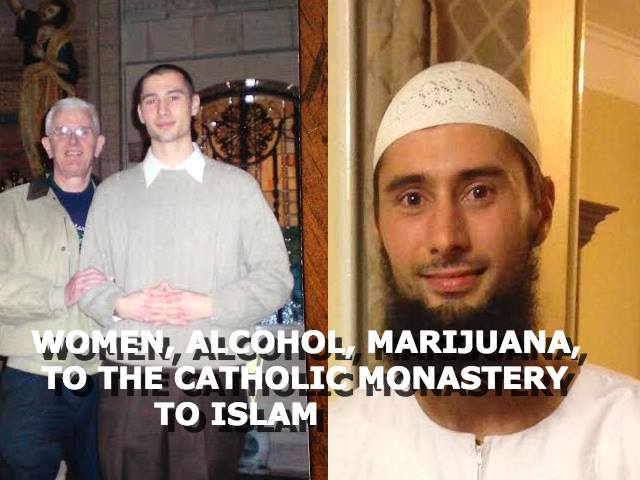 This is the Story of Salahuddin Decero from Philadelphia Pennsylvania. He was born into a Sicilian family in South Philadelphia. Born a Roman Catholic Christian. Who fell into a life of worldly pleasures and comforts then went on to spend a total of 8.5 years in the Monastery.

He said he was a Discalced Carmelite hermit who lived the roughest of lives! We woke up everyday at 330 AM and prayed al…l morning and separated his day between prayer and study and his day would end at 10 PM from all this. After all this he finally found the truth after meeting a Muslim(Any peaceful person who submits to God) who gave him Dawah.

“From the age of 13-17 my life consisted of very few things. Women, Alcohol, Marijuana, crime, and money. I quickly fell into a life of worldly pleasures and comforts. I quit school in the 9th grade and got a full time job doing landscaping. I moved out of my house at 15 years old to live with a friend of mine who I got in trouble with, and we worked together and lived together. I really don’t remember a lot of my teenage years because I was always so intoxicated and high. But then right when I would turn 17 something happened!

“I realized the Jesus I believe in was the Jesus the Catholic Church taught me, not the Jesus in the Bible. So now I was in turmoil I did not know what to do! I started having pains in my head and stomach because I was so confused and lost. I really no longer believed what I did before but I did not know what was right. When I was becoming a Muslim the hardest part was not giving up Jesus was God, the hardest part was giving up 8.5 years of my life invested time.”
Read more
http://thedeenshow.com/watch/3221/women-alcohol-marijuana-to-the-catholic-monastery-to-islam

Become a contributor to TheDeenShow
http://www.eddiedvd.com/products/donations