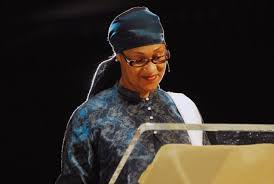 I was born in Trinidad in the Caribbean; both of my parents were from Barbados.

Watch an interview in Toronto in 2012 with sister Tayyibah Taylor

When I was seven years old, my father was transferred to Texaco, Canada, and we all moved up to Toronto.

So I grew up in Toronto, I was educated there; I went to the University of Toronto.

I was always very analytical about life and about things. My parents were practicing Christians, so we went to church three times a week. One of the things I couldn’t reconcile either mathematically or scientifically was the Trinity. I was always questioning and investigating different religions.

When I was in grade ten, we studied world religions; and as part of our studies, we had a fieldtrip to a mosque. When I went to the mosque, I was really mesmerized by the Adhan (call to prayer) and by the prayer itself.

I stayed behind when others went back to the school and I spoke with one of the women there and asked her what Muslims believe? She said, well if you want to be a Muslim, all you have to say is la ilaha illa Allah, Muhammad rasulullah (There is no God but Allah, and Muhammad is His messenger), so I did. So officially, that’s when I became Muslim.

However, that lasted for few months, my father used to drive me to the mosque, I told him I was doing some extracurricular research, but gradually I stopped. I tried to be a Muslim on my own, but it didn’t really work.

A few years passed and two of my cousins became Muslim. By the time I got to the University of Toronto, I was doing lots and lots of research, self-exploration, trying to find my place in the universe, trying to define who I was, and what my relationship to the Creator was. I actually decided at one point that there was no God.

It was in the microbiology lab, after doing an experiment with chromatography, I looked down and saw the different shades of chlorophyll, and then I decided, “Yes, there is definitely a God.” and it was magnificent epiphany. I thought that if there is a God then I have to know what my relationship to God is; what my responsibility is.

At that time, there were several men who had, instead of going to Vietnam, decided to take the Canadian option, and there were draft outers from America and they had become Muslim. So, we had these raging debates about politics, religion, and life, there at the student union, and I was part of that.

I needed structure in my life, and Islam certainly afforded that
I had kind of made up my mind what would be the perfect religion, and when I heard about Islam again, I decided that that would be my spiritual path.

The Nation of Islam didn’t resonate with me at all, I didn’t really experience any racism although I have grown up in an environment that was all white; only myself and one other family were the only people of color in the whole school.

However, during these debates there was this constant theme that even if you are the most politically aware and politically conscious person, there is a step after that, which is “spiritual consciousness.” What I was seeking really was a formula for not only spiritual peace and inner peace, but also something that gave me form, structure and self-mastery, and all of that was in Islam.
The late 60s was a time of social upheaval and everyone was “doing their own thing,” and so I was always inquisitive about existence and really felt that I needed structure in my life, and Islam certainly afforded that.

I actually dropped out of the University of Toronto and went back to Barbados. My parents had kept their home there and we, sometimes, went back in winter vacations. At this time of upheaval, I knew I needed a change and hadn’t decided what the change was going to look like yet. So, I decided to find myself, and went to Barbados and I spent several months on the beach, and I decided then to become Muslim. So when I came back, I came back quite a different person than when I had left Toronto.

Since I was the kind of teenager that really tested my parents’ patience and how I went into different things; it seemed like it is another phase that I was going through. So, everybody just said OK, it is another one of her “things,” we’ll just wait until she comes out the other side.

When they realized that I had really made substantial change, at first, I think, they were sad that I hadn’t chosen their religious tradition. They were happy, at least, that I have chosen a religion, a tradition of faith.

The change in my personal being became quite evident, in terms of my calm peace and living a less fanatic life, and I think that was a welcomed change.

I actually married an American and moved to Houston, he played in the NBA
After I became Muslim, there was only a handful of Canadians who had embraced Islam, one of them was my cousin and she was married to Bilal Philipps. There is also Sheikh Abdullah Hakim Quick there in Toronto. We had a very small community, we would, debate, and discuss Islam; and they decided that in order to get the essence of Islam they would need Arabic to translate Quran for themselves, because if you don’t have Arabic you become a hostage to someone else’s interpretation, and so they left to Madinah.

I actually married an American and moved to Houston, he played in the NBA. And after he was finished playing, the Saudis asked him to come over there and set up a basketball program, so this was a perfect opportunity for us to go and learn Arabic. While he was being a coach at the university, I went to Quran School, and I was able to learn Arabic and Quran, and Islamic theology and so on. I was reunited with my friends from Toronto.

I was invited to a conference in the early 90s for Muslim women in America. At that conference there was so many accomplished empowered Muslim women, I was really excited and I felt “wow! It is great to be able to tell their stories to everyone, so I said we need a magazine!” One of the women there said, “I have a magazine.” However, it turned out to be an eight-pages of photocopied newsletter. I said, “No, no we need a real magazine.”

So, on the way home on the plane, at that time I was living in Seattle, and the conference had been in Chicago, and all the way home I kept saying to the two friends who were flying with me, we need a magazine for Muslim women, and they said you should go ahead and do it. So I said, “Well OK, I will.”

When I got home, I sat down and wrote the format, and decided what it would look like in my head. So, that was basically the seed… When I think back yes, that was the genesis, but perhaps, many years before that, growing up in Toronto when I saw no people of color reflected in the media or the textbooks or billboards, there was this real subtle internalization of something is wrong with us as a people.

I can remember very distinctly, at the age of 12 going to one of my aunts, and on her table there was a magazine, I picked it up, and was flipping through it and seeing people of color in positions of authority; people of color contributing positively to society; it was this validation of self; you know “ah! We’re OK after all.”

Even though my father was a chemical engineer, we have doctors and lawyers in the family, and even though I knew professions, it was still this nagging feeling inside.

The right of a woman to live in a peaceful household, the right of a woman to raise her opinion, it is really the key right here. Does the Muslim woman have spiritual, social, intellectual autonomy or not? Once you answer that question, I think everything flows from there. So if your premise is that Islam is a formula for spiritual peace, for all people, for all places, for all times, that definitely includes women.

Islam is renascent with the principles of North America in justice and freedom
The American culture power is disproportionate, and likewise I think people are also looking to Muslim Americans to see what’s going on. I think that it will have a trickle down affect or trickle up affect whichever way, because what happens is that you’re demanding that people put aside cultural practices and tribal practices, which have in many essences trumpet the religion. And in some areas really the tribal ritual or the cultural tradition has been far more important and far more practiced than the religion.

But don’t forget that Islam is not contagion on your location and your sense of peace and connection to Allah. You can be a Muslim anywhere, and that’s the beautiful thing about Islam, it is universal. It has always traveled and spread.

I think Islam is renascent with the principles of North America in justice and freedom and pursuit fulfillment of your potential. Those are things that are right in the American ideology are right in Islam; so there is no dichotomy between being Muslim and being American. I think it is only there in peoples’ minds.