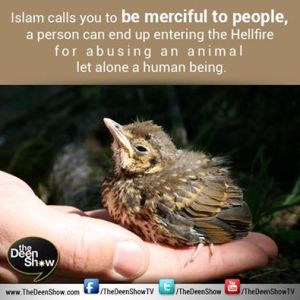 The Muslim is merciful, for mercy is one of the traits of a Muslim, since it is the source of a pure soul and spirit. By being kind, doing righteous deeds, staying away from evil, and shunning corruption, the Muslim’s soul abides in purity and his spirit remains in goodness. Since this is the case, then mercy would never separate from his heart at all. It is for this reason that the Muslim loves mercy, he spreads and encourages it and calls others to it, believing in Allah’s saying:

And acting according to His Messenger’s saying:

“Allah(God) is only merciful with those who show mercy to others.” [Al-Bukhari]

“Be merciful to those on the earth, so the One above the heavens will be merciful to you.” [At-Tabarani and al-Hakim with a sahih (authentic) chain]
END_OF_DOCUMENT_TOKEN_TO_BE_REPLACED